Prostate cancer is the second leading cause of cancer death in men, with the incidence expected to double by 2030 due to the ageing global population. However, while 1-in-6 men are diagnosed with prostate cancer, only 1-in-36 will die from prostate cancer, highlighting the sometimes indolent nature of the disease. The challenge from a urology and radiology perspective is to accurately identify the aggressive cancers requiring radical therapy whilst avoiding over treatment of more benevolent tumours.

In the absence of reliable blood or urine markers biomarkers, imaging offers the greatest potential for differentiating more aggressive, lethal cancers. Multi-parametric MRI (mp-MRI), incorporating anatomical and functional imaging has now been validated as a means of detecting prostate tumours. The recent PROMIS trial in the UK found MRI to be almost twice as sensitive as the traditional diagnostic test of transrectal biopsy and could help avoid unnecessary biopsy in 25% of patients. However, the technique is limited in some clinical situations including patients with hip replacements, assessing for nodal involvement and identifying recurrence post radical therapy. Additional improvements may be achieved through functional imaging of tumours (the way a tumour behaves) rather than simply imaging their anatomical structure, with PET imaging and novel MRI sequences potential candidates. We are currently recruiting to several imaging trials looking to address these issues, for example using PET imaging with different tracers and MRI using multi-nuclear spectroscopy, including hyperpolarised carbon.

The key functional mpMRI sequence for lesion detection and characterisation is diffusion-weighted imaging (DWI), yet this technique is particularly prone to artefact-induced distortion. We have developed a method for quantifying this and can produce a visual “heat-map” depiction of distorted areas. This has a number of potential benefits in both routine practice and in the research setting, for example in the development of new diffusion-based sequences.

Bone metastases in prostate cancer are sclerotic in nature and appear as areas of increased density on CT imaging. We have applied Stradwin, a novel post-processing software-tool developed by Graham Treece at the University of Cambridge, to assess trabecular bone density and create 3D-rendered ‘bone-maps’ of osseous metastases. These single image bone maps take significantly less time to read and may be easier for non-specialists to interpret in the context of multi-disciplinary team meetings or as a discussion-aide when assessing for disease extent, progression or stability. This post-processing software is free-to-use, intuitive and fully compatible with DICOM data. 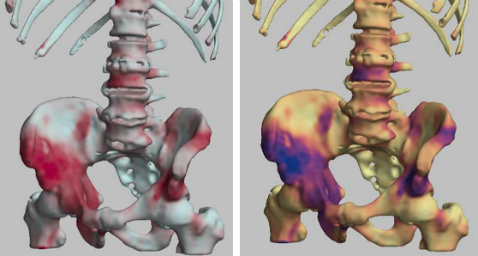 DKI attempts to quantify non-Gaussian diffusion motion of water molecules, and is a means of probing the heterogeneity of tumour tissue compared to the relative homogeneity of normal tissue. We have shown that tumours have increased cellularity with reduced stroma and luminal space compared to normal tissue, with difference in kurtosis parameters between low-intermediate grade (Gleason 3+4) and high grade tumours (≥ 4+3), which may be explained by increasing heterogeneity in the more aggressive tumours.

MTI detects the interaction between free water molecules, which provide the majority of visible MR signal, and the bound pool, which can be visualised by its effect on the free pool following application of a magnetization pulse. Subtraction imaging allows for quantification of the MT ratio (MTR) which serves as a measure of the structural integrity of tissues and can probe the microstructural changes induced by pathological processes.

Figure 5. Tumours in the peripheral (arrow) and transition zone (outline) are clearly demonstrated to have an increased magnetization transfer ratio (right image).