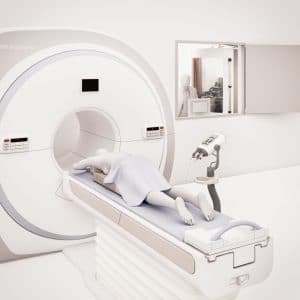 recently published paper “Imaging breast cancer using hyperpolarized carbon-13 MRI”, published in the  Proceedings of the National Academy of Sciences (PNAS),  has  shown for the first time how a new MRI technique named hyperpolarised 13C-MRI can be applied to studying breast cancer.

Patients were injected with a breakdown product of glucose, termed pyruvate: more aggressive tumours converted this molecule into lactate, unlike their less aggressive counterparts. In the future, this could be used to better characterise breast cancer and allow doctors to determine at an earlier timepoint whether patients are responding successfully to chemotherapy.

The team based at the Cancer Research UK Cambridge Institute and the Department of Radiology, University of Cambridge, tested the technique in seven patients with various types and grades of breast cancer before they had received any treatment.

They used the scan to measure how fast the patients’ tumours were metabolising a naturally occurring molecule called pyruvate, and were able to detect differences in the size, type and grade of tumours – a measure of how fast growing, or aggressive the cancer is.

The scan also revealed in more detail the ‘topography’ of the tumour, detecting variations in metabolism between different regions of the same tumour. The researchers showed that monitoring this conversion in real-time could be used to infer the size, type and aggressiveness of the breast cancer.

The team now hopes to trial this scan in larger groups of patients, to see if it can be reliably used to inform treatment decisions in hospitals.