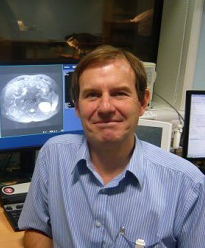 David J Lomas was born in 1957 in the North West of England and educated in Stockport, Cambridge and London. He is formally qualified in Engineering, Medicine and Radiology. Following Radiology training in Cambridge he worked in 1993 as a Visiting Scientist at the Mayo MR Research Lab with Richard Ehman and Steven Riederer where he was involved in the early development of MR elastography. Unusually for a Radiologist he learnt pulse programming and has a detailed understanding of MR system hardware. Appointed as a University Lecturer in 1994 he developed one of the first MRCP services in the UK and researched a range of novel body MRI imaging techniques using hydrographic and fast imaging technologies. In 1997 he became Lead Radiologist for Clinical MRI services, responsible for the four 1.5T and one 3T MRI systems in Radiology used for both NHS and research studies. Appointed to the Chair of Clinical MRI in 2001 he continues to undertake research in Body MRI, particular interests include liver and biliary imaging, increasing the use of MRI to replace X-rays in paediatrics, non-contrast enhanced MR angiography and developing more robust cancer imaging metrics. A particular interest is hepatobiliary and GI imaging and he is one of the lead radiologists at Addenbrooke’s Hospital supporting the comprehensive hepatology and transplantation service. He has supervised 3 PhD students on MRI related research, all completing on time and is currently supervising 2 part-time PhD students.

Over the past 5 years he has been Lead Clinician responsible for several multi-million pound imaging projects, in particular the refurbishment of the MRIS Unit, the CRUK-CRI-Radiology 3T MR collaboration, and the recent establishment of the Addenbrooke’s PET-CT Unit. Married with 2 daughters his other interests include industrial architecture, photography, plumbing, computing, french and swimming.

Locally he serves on several Addenbrooke’s related committees including the Research Advisory Committee, and the Grants Committee. Nationally he serves as a member of the UK’s Health Protection Authority (HPA) Advisory Group on Non-Ionising Radiation that has recently published reports on Mobile Phones and Static Magnetic Fields. In addition he is currently a member of the Faculty Board of the Royal College of Radiologists and the MR committee of the British Institute of Radiology. Internationally he is currently the Secretary of the International Society of Magnetic Resonance Imaging in Medicine and has previously served on several of their committees including the Board of Trustees, executive, governance and audit committees. In 2003 as Scientific Program Chair he was responsible for planning the Annual ISMRM Meeting in Toronto – successful despite postponement owing to the SARS outbreak. He helped to establish the Research sub-committee of the European Society of Radiology and is currently an assistant editor for European Radiology and the Journal of Magnetic Resonance Imaging.

Imaging of the liver and hepatobiliary tracts.